One of the most powerful changes that the Reformed tradition gave to the Church was the idea that the people have the right to elect their own leaders – in both Church and State. 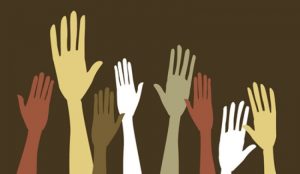 In the European medieval Church parish priests were appointed by Bishops, or patrons, not by the vote of the local church.  Bishops were appointed based on wealth, royal favour, local politics, or bribery!  The Reformed practice of electing our own leaders was, therefore, revolutionary.

In the United Reformed Church, we elect, and ordain, local leaders called Elders who serve the local church.  We decide, in a Church Meeting, whether to call a particular minister to serve our church (and the Church Meeting can ask the minister to leave too!).  Our church is governed by Councils – Church Meetings, Synods and General Assembly.  Those elected to serve in various roles do so for specific terms of office (even Elders who are ordained usually serve for renewable terms of office) and there are always checks and balances to ensure that we remain non-hierarchical.

We try to discern the mind of Christ together in our Church Meetings.  That isn’t the same as majority rule, but involves a thoughtful process of discernment where we consider what is best and try our hardest to hear, and appreciate, minority views believing that God is heard best in community.

Of course, the idea that Church Members should elect their own officials soon spread to a desire to elect those who govern the State – something which made Reformed Christianity controversial and dangerous to the powers-that-be.