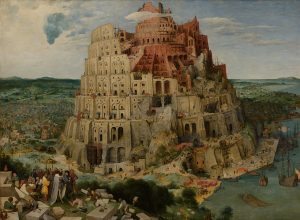 The picture is a depiction of the Tower of Babel by Pieter Bruegel the Elder. He was a Sixteenth Century Flemish Renaissance painter who specialised in paintings populated by peasants, often with a large landscape element. He was normally concerned with painting poor country people, the rituals of village life, hunts, meals, festivals, dances and games were the normal subjects of his paintings. This picture, however is different. It is dominated by the Tower of Babel that we heard about in our reading from Genesis 11.

A Bit of History

The story of Babel, like most of the early parts of Genesis, is set in the 3rd Millennium before Jesus Christ. The stories contained in Genesis were folk stories told from one generation to another but probably weren’t written down and included in the book we now know as Genesis until about 300 years before Jesus.

When the stories were written up the culture and context of the Jewish people had changed. They lived in a dangerous age where empires rose and fell. They had been invaded twice and different sections of their political elite had been deported. Around the year 586 BC the political elite, the leaders and the middle classes of the Jewish people were deported to Babylon. This was a national disaster for them and the nearly 50 years spent in captivity changed the Jewish people forever. They mixed with, and lived under the power of, gentiles with different gods, cultures and ways of doing things. The Jews left behind married gentiles and were more exposed to their culture and faiths than ever before. The rise and fall of empires, the exposure to a range of religious ideas and cultures affected the Jewish people and we can see traces of this in the Old Testament as new ideas came into Jewish thought.

Genesis was, in part, designed to give a history to the Jewish people; it wrote up their history in order to answer some deep questions about their origins and to show how God had graciously chosen them to be His people. The stories informed their sense of identity and purpose. Of course the stories were interpreted in different ways and different contexts.

The normal interpretation of the Babel goes something like this: humanity got too big for its boots and discovered how to build. This building skill went to our heads and we felt there was nothing we couldn’t do; we began to think we were gods. God, however, intervened and punished us by destroying the Tower and confusing our one language by turning it into lots of different languages – so that we could never again unite and threaten God’s own power and authority.

Bruegel, through art, challenges the traditional understanding of the Babel story. He points us towards a more helpful, and I think more faithful, interpretation of the text.

Bruegel’s depiction of the architecture of the Tower, with its numerous arches and other examples of Roman engineering, is deliberately reminiscent of the Roman Coliseum. In the Coliseum people were killed for the savage entertainment of the crowds – slaves, gladiators, prisoners of war, and those who were sentenced by the courts for various anti-social behaviours.

Bruegel’s painting seems to attribute the ultimate failure of the Tower to engineering difficulties rather than to sudden, divinely-caused linguistic differences. Although at first glance the Tower appears to be a stable series of concentric pillars, upon closer examination it is apparent that none of the layers lie at a true horizontal; rather, the Tower is built as an ascending spiral. A few arches can already be seen crumbling. More troubling, perhaps, is the fact that the foundation and bottom layers of the Tower had not been completed before the higher layers were constructed. In other words the very foundations of the Tower were the cause of its destruction.

Clearly the Colosseum has obvious and brutal connotations. We tend to glorify the Romans and are in awe of their remarkable achievements but I find historians often forget the fact that the Roman economy was based on slavery and that the famous “pax romana” meant that peace was only secured through massive military might. Military might tends to want to be moral right.

Brueger shows us this theme of dominance in the bottom left hand corner of the painting. We see the king coming to inspect progress on the Tower and it’s all about power. The theme of violence and domination is here – the king is attended by armed guards, he’s lording it over the others. The workers, however, are practically prostrate before him on the ground, shuffling up to him on their knees in supplication. This isn’t the behaviour of workers who are secure in their employment but of slaves living in fear and terror. Babel, for Brueger was the first totalitarian state.

And God’s response to this lust for power and domination was the destruction of this project of false unity through domination. God freed the people by creating difference.

Babel with its attempt to have one language, one empire, and one system was transformed into hundreds of systems and peoples. The traditional interpretation of seeing a diversity of people, culture and language as a punishment from God is wrong. Instead, these diversities are what liberate us from the systems and powers that seek to dominate us by the enforced unity and uniformity of empire. The destruction of Babel, therefore, is about celebrating diversity; a diversity that God commands, creates and delights in.

§This brings us to our reading from the Acts of the Apostles where something goes on with language again. In the Babel story one language is turned into many as a way to show the diversity of God’s creation. The imposition of one language is a trick of Empire; the Romans wanted everyone to speak Latin, the English and French ensured their languages were the languages of colonisation in Africa – even closer to home Gaelic and Welsh were outlawed at different points in our history as English was imposed. The Babel story can be read as a rebellion against that control.

At Pentecost we don’t know what language Peter was speaking in at first – Hebrew, Latin or, more probably, Aramaic. However, people there heard the Good News in their own language through the gift of the Holy Spirit.

At that Pentecost celebration the Church was born in diversity – people heard the Good News in their own language and responded. Indeed, the rest of the Book of Acts is about the Holy Spirit driving believers out to new challenges, new people, new places to create a diverse Church. An obscure Jewish sect became a rich mixed Church of slave and free, Jew and gentile, male and female, old and young – totally different to the Roman society which kept such people in their different places.

Of course the Church is always tempted to go back to the tempting imperial sin of uniformity. At different times in our history we’ve been resistant to the impulse of the Holy Spirit driving us out to be ever wider, ever more diverse. Whether that’s Catholic missionaries teaching people to learn Latin in order to worship or Protestant missionaries teaching English Victorian manners as being godly – the temptation is ever present – why can’t they be more like us?

Yet Pentecost reminds us of the amazing diversity of God’s people and God’s purposes. This is, after all, the birthday of the Church and the Holy Spirit drives us to ever new challenges, ever new opportunities to grow, to proclaim God’s good news to people like us and to people who are radically different so that His purposes are worked out from age to age.

Will you pray with me?

Spirit of Truth,
whom the world can never grasp,
touch our hearts
with the shock of your coming;
fill us with desire for your disturbing peace,
fire us with longing to speak your uncontainable word
push us out beyond our comfort zones,
that we may welcome all people in your name,
and, instead of seeking to change them,
be changed by you, through them.
Amen.

x
Top
Everyone is welcome here at Barrhead United Reformed Church
We use cookies to ensure that we give you the best experience on our website. If you continue to use this site we will assume that you are happy with it.Ok