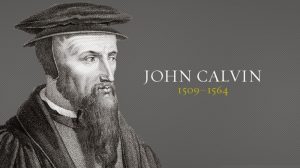 The United Reformed Church is a part of a world-wide family of over 70 million Christians which grew out of the religious changes in Europe in the 16th Century.  These changes are now called the “Protestant Reformation”.

Our roots lie in the work of some of the Protestant “reformers” in particular John Calvin – a French theologian, Biblical scholar and pastor who worked for most of his ministry in Geneva.  In Scotland John Knox, a collaborator with Calvin, helped bring the Reformation during the reign of Mary Stuart.  Calvin’s ideas changed the Church of England and many of its leading ministers, under the reigns of Edward VI, Mary (when many ministers fled to Europe) and Elizabeth. Calvin’s ideas led to the development of, amongst others, Presbyterian, Independent and Congregational Churches.  Nowadays this Reformed tradition is represented by the United Reformed Church, the Church of Scotland, the Free Church of Scotland and the Congregational Federation amongst others.

Reformed Christians developed values that are now part of our everyday lives – freedom of thought, democracy and equality, separation of Church and State and a healthy suspicion of those who govern.  The hallmarks of the United Reformed Church, in particular, and Reformed Christianity in general are explored in more detail in each of the pages that follow.  We embody Power from Below, are Driven by Grace, believe that God is Still Speaking, are A Political Church, insist on the Importance of the Bible and so have developed A Thoughtful Faith.