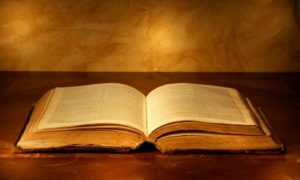 One of the insights of the Reformers of the 16th Century – both Catholic and Protestant – was that the Bible needed to be nearer the centre of the Church’s life and thought.  Calvin was, first and foremost, a Biblical scholar.  The new technology of the time – the printing press – meant that it was possible for many more people to have their own copy of the Bible – in their own language instead of in Latin – so that they could read and interpret it for themselves.

The Bible is the sole historical basis from which our faith is sprung – it tells of God’s dealings with the Jewish people – choosing them from the nations of the earth, telling of their victories and struggles, highlighting their strengths and weaknesses – as well as telling the story of Jesus and the earliest Church.  The Bible does more than tell the story of God’s dealings with humanity – it also interprets those dealings and encourages us to continue to interpret our religious experiences and yearnings in the light of our own contemporary reality.

Calvin himself recognised this as, whilst the though the Bible was central to his understanding of God and the Church,  he also used the ideas and insights of his own age believing that philosophers had been stimulated by God: “that they may enlighten the world in knowledge of the truth”.

In the last 100 years, or so, many Christians have interpreted the Bible in ways which have led to intolerance of those who are different, a dogmatic way of viewing the world and conflicts with science.  Fundamentalism has distorted the core message of the Bible which urges us to pay attention to God not the Bible!